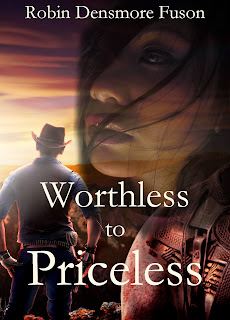 Worthless to Priceless is a Christian Historical Fiction novella.

At the tender age of thirteen, orphaned Jenny Low decides to take matters in her own hands and runs away from her captive life in a Ute tribe. Rescued from near death by a kindly teamster Samuel Baunof, Jenny is sent to live with a family in Glenwood Springs, Colorado in 1886. She learns the truth of wickedness and runs again straight into true evil.

Meanwhile, Samuel holds his head up while facing life’s cruelty head on. A few years later, he crosses paths with the orphaned girl he once rescued. Now a beautiful young woman, Jenny is a God-send in his time of need. Their trials aren’t over and Samuel finds himself tracking her through the wilderness where, unbeknownst to him, someone else is after her too. Will he get to her in time?

Can these two people with completely different backgrounds and beliefs help each other and those around them? Is Samuel able to rescue Jenny from the horror her life has been drawn into? Is his faith strong enough to help her understand that God loves her and didn’t abandon her? Jenny is challenged to accept love and forgiveness even when she feels the world closing in.