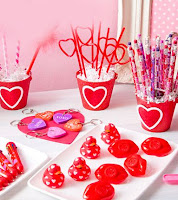 The party rocked on. Red, pink, and white ribbons, and hearts hung from the ceiling of this elementary classroom in the small rural town. Children passed valentines and ate cupcakes with thick pink frosting and sprinkles. Kids laughed and teased. Music played lightly from a boom box. Teachers and parents indulged the giddiness on this fourteenth day of February.


The morning started off clear with few clouds, but that changed into a dark drizzling afternoon.


The clown was late. He should have arrived fifteen minutes ago to do magic.


Mrs. Fields said to one of the aids, “We better come up with something to occupy the kids.”


Miss Clark said, “I brought a few games. I’ll set them up in three areas.”


The teacher gave the instructions to the students. Kids wiggled through the room, planning on joining the pre-determined groups.


Rodger, a nine-year-old, pointed at the window and erupted, “Aaaahhhh! A monster!”


Children and adults gaped at the window. Nothing.


Mrs. Fields rushed to him and put her hands on his shoulders. “Rodger, what did you see?”


He wailed, “A frightful green face with yellow eyes. And shshharp teeth! I swear I saw it!”


“That must be the special visitor we’re expecting. He probably peeked into the room. I’ll check what’s holding him up.”


Mrs. Fields left, closing the door behind her.


The lights went out.


Lightning streaked the sky and Susie screamed, “There he is!”


Kids broke out of their groups. Some crawled under desks. Others crowded behind the adults. Tears streamed down chocolate and pink icing-laced faces.


The handle on a toy Jack-in-the-Box turned a quarter turn and popped its lid. A clown screeched, “Hahahaha!”


Everyone startled into silence.


A shadow sliced across the threshold.


Students and adults ran to the far wall.


The creature entered. A low growl curdled the air around the beast.


Children hid their eyes and cried. A parent untangled herself from small arms. “Stop! Go Away! Leave us alone!”


Shrill laughter was the reply.


The stuffed monkey that had hung on the coat hook spring up on the teacher’s desk. “Eeek Eeek!”


All the toys came alive and turned toward the people crowding the wall.


The creature slugged forward. The deafening wails of children grew intense with each step of the monster. Yellow eyes pierced the darkening room.


Josh said, “Just when it was getting intense. Best game ever!”